Another week and another red carpet film premier has been underway and this one is for the launch of “The Rum Diary” a film, I wouldn’t mind seeing in a few weeks- partly due to the films soundtrack, particularly an awesome song by Pitbull.

Anyway! Back to the Fashion.

Amber Heard, a rather unknown model and actress took to the red carpet alongside her co-star Johnny Depp as they posed for pictures here in the beautiful (rainy damp) city of London.

Posing brightly for pictures she worked the carpet in the no holds bar gown that literally shows every curve and crevice known to man.

A very simple choice of dress- and she removed the accessories that the designer had originally paired with the gown- which to be fair to her improved the look. 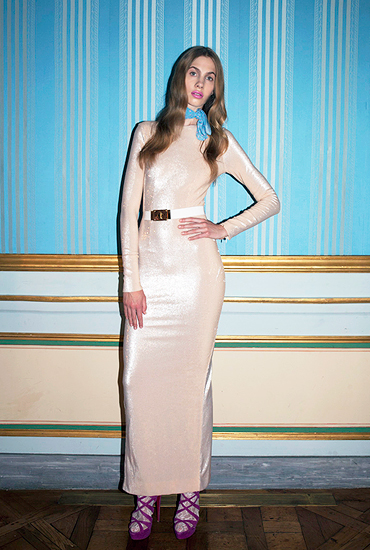 The dress is very straight and rather boring- but she jazzed it up with the celebrity favourite Louboutin peep toes whilst the makeup followed the dress design of high shine and pale.

The gown is certainly NOT for everyone (e.g coco) but she at least works it well and she knows she has the figure to do so.

I had a quick look through the other parts of the collection and the gown that stood out to me was the large sleeve column dress..