The MTV movie awards took place last night in California Universal city, all the celebs were out in full throttle for this and so was the fashion!

A big night for the Twilight clan with several awards. The winners list is below (spoiler alert)

Now onto the Hottest fashion!

A controversial one tonight- with Reese Witherspoon commenting indirectly on her nude photographs, but beside that she looked lovely in her striking blue dress by Michael Kors.

Paired with a contrasting pair of Red Soled Loubiton-The shoes which we loved are named Bibi- 140mm heel height- a thick sky high heel that provides height and beautiful security. The colour is an amethyste but comes in a variety of colours. Made from a lovely soft suade.

The Hot Disney star that has recently featured all over the net with her singer teen sensation boyfriend Justin Bieber and this has been the first in a long string of pictures of her actually dressed! In her defence she is wearing a stunning dress and looks as beautiful as ever. Wearing an Giambattista Valli pleated skirt and fresh crisp ivory blouse. A lovely sunny look for the award show.

The comedic winner of the MTV movie awards from her film Easy A- which we ACTUALLY enjoyed, so we do agree with this choice. She accepted the award in this stunning beaut of a black lace overlay dress by Bottega Veneta 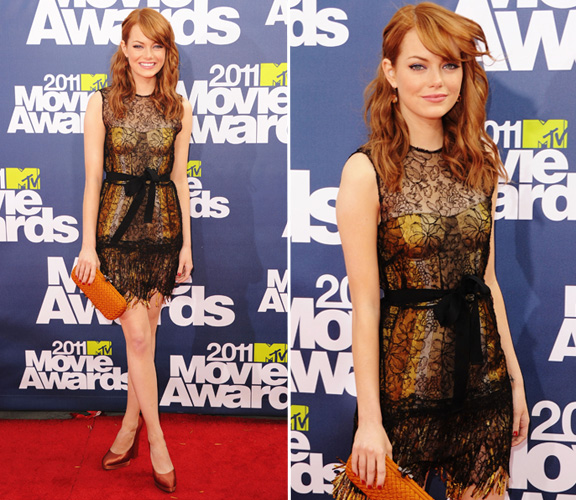 The dress is apart of her fall 2011 collection and will be out for general public in the next few weeks. She pairs the cute dress with a simple copper pair of heels by Casadei.

The smoking hot transformers star attended the award show in this perfectly fitted D&G outfit, RRP of £400 from Harvey Nicols whilst her heels were from Sergio Rossi heels.

Teen Wolf star Crystal Reed arrived in her blue suede pumps and this full almost maid looking dress skirt by Ina Soltani. Not a keen dress but still striking and got a lot of attention on the red carpet.

Mila, did an exciting sketch at the award show with Justin Timberlake- she wore an outfit by Balmain and paired it with Charlotte Olympia peach pump shoes.

The understated top and outfit is part of Balmain’s latest 2011 fall collection set for release soon.

Hip hop singer Nicki, arrived on the red carpet in this outfit we are really not sure about- it really demonstrated her round and ample curves but IT was not the best choice in the world. Don’t get us wrong we are a huge Nicki Minaj fan but not last night! the outfit looked rather cheap but her hair was nice at least!