A few hours ago London’s power couple David and Victoria Beckham have their eyes set on a new domain of further increasing their fortune which is currently estimated at £165m with David Beckham’s latest venture in the Fashion world with the creation of his own line.

Following in his fashionista wife footstep his range will include a bodywear line and fragrence uniquely named Homme by David Beckham set to be released at some point this year.

News broke on the social media website Twitter when Victoria tweeted ‘David announced today he is launching his own bodywear range!!! x’

The inspiration had come from their colaboration with Armani (and his dear wife) back in 2007, David was the face of the very sucessful and popular Armani underware ad which was a global campaign, released on thousands of billboards and magazine spreads around the world which clearly boosted the Beckhams net worth as well as Armani with estimated profits doubling. Clothing is clearly a money maker for the Beckhams earning £20 million from the industry so far this year- and that amount is only going to get bigger.

He plans to incorporate a sport based logo designed by fashion designer Stella McCartney’s husband Alashair Willis and to be the face of the brand.  He professed: ‘It proved to me that there is a real market for good-looking, well-made men’s bodywear.’ As he get older he releases his days are numbered as a sports man and with a new baby girl on the way in June, he needs to diversify to ensure his future stability in the public eye- therefore his drive to become an entrepreneur is powerful.

He admits: ‘I’m getting older now and I don’t have many years left. This is my last contract year, but who knows what will happen.’

A lot of work has already been placed into the creation of his brand as he openly suggests his team are working on fabrics and products. His three boys have also been involved in the process and we can only imagine the couples next range may be kids wear especially when Victoria gets to put the girls in a variety of coutour outfits.

There is no launch date set for the clothing range but the scent will be released in September.

We will keep you posted! 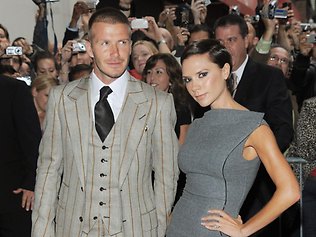