So last night was the announcement of the 2012 Grammy awards in sunny Los Angeles and all the biggest music artists were out in full glory to present the nominations for the show that will be in February. One of the hottest artists Nicki Minaj came to the stage in a bright blue strapless dress which fitted her curvy body like a glove and as usual she had her bright but complimenting pink curly statemented hair.

Her gown by D&G had a soft lace overlay, strapless and figure huggingly tight. 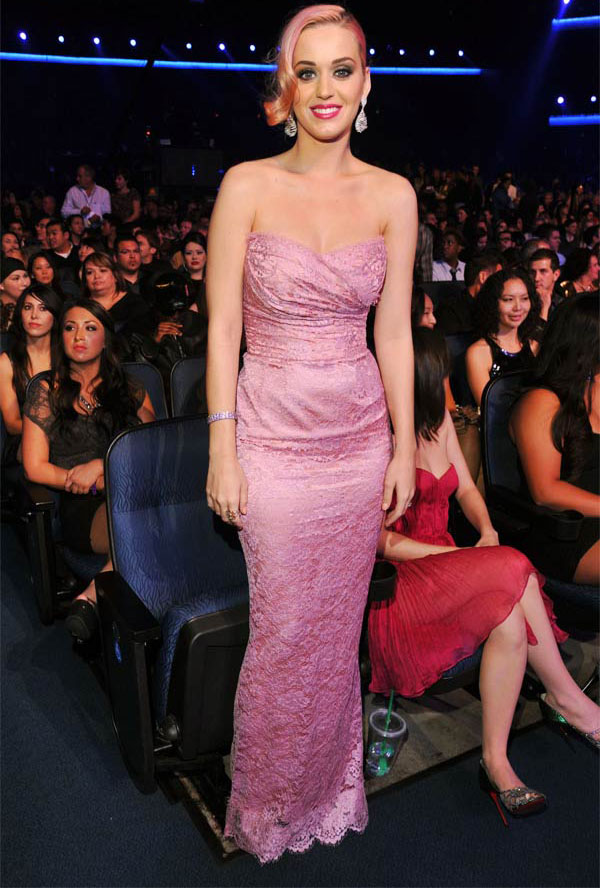 Both looked fabulous side by side and complimented each others look really well- it was as if they had conversed before hand about their choice of outfits.

One of my favourite things on Nicki are her shoes!- oh yes- WE ARE back to shoes.

Her Versace triple stacked platform shoes are a real show stopper, its not the first time we have seen Barbie in the shoes- she favours them quite a lot but on this particular night she chose a blue and white pair which go perfectly with her dress.

I have to say Nicki is known for going very loud and wild with her choice of outfits but this particular ensemble- despite the pink hair, is very well put together- there is nothing you can really knock, the dress, a lovely shade of bright blue, killer heels and awesome hair she worked it well today.

The dress has panels to the front and side- it works in a very similar way to the dress Kate Winslet in Stella Mccartney wore on two occasions, giving the subtle illusion of a slimmer waist, thighs and hips, Nicky due to her curves did not need the addition of a colour contrast otherwise it would be TOO CURVY! So it worked perfectly well for her. The rapper should also be happy as she was nominated for awards at the Grammys as well… watch this space in February to see if she wins!

Rihanna announces her pregnancy in a bright pink coat and baby bump!

Sarah Jessica Parker at the ‘And Just Like That’ Premiere

My Salt Scrub at Nirvana Spa